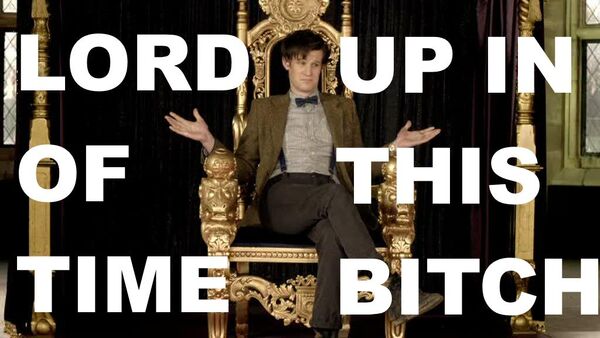 A mad man with a box that defeats any being of any nature, any day of the week.

Tier: 2-A | 0 | Ocean Tier | CAN DESTROY ANY BEING, NON-BEING, EVERYTHING, NOTHING, CAN DESTROY BEINGS BEYOND TIERS AND CONCEPTS INCLUDING NON TIERS AND NON CONCEPTS.

Attack Potency: Multiverse level+ (Made the laws of time his ) | True Infinity (Is the most powerful person in his universe) | Oceanic (Soloed fiction and look how many fucks he gave) |

Speed: Faster than you will be, or anyone/anything ever will be because he can be anywhere he wants to be and nowhere

Lifting Strength: The Doctor doesn’t need to lift because, things just obey him without him needing to think it

Striking Strength: Is irrelevant because he’s so swag, once you glaze upon his might, you’ve already been struck down

Durability: Can’t even be hurt by anything so having durability irrelevant

Intelligence: Omniscient (Knows everything and is clever)

Weaknesses: Is beyond the beyondness of weaknesses

Key: Base Wank | Extended Wank | Mega Wank | With any prep

Donald Trump (As you can see here, he can break down walls made of materials 400x stronger than diamond)

Start a Discussion Discussions about The Doctor (Wanked)