Disasters in 2020 is the evil disasters in the real life world where people accidentally celebrated the new year in between December 31, 2019 to January 1, 2020, this is where we take place in the future (Implied that's about why you shouldn't celebrated the new year). Part of disasters take place in months to shown us on the breaking news where reporters tell people to stay safe where people must survive the 2020 disasters. However the future year, 2020 can warping reality through the future that can be changed in the real life world goes become worse.

Age: Exactly, this is not where these disasters beginning first...

Striking Strength: None (It's not capable of physical attacks.)

Durability: Unknown (Couldn't be end however anyone can't take down many disasters or even changed the plot.)

Range: Planetary (Can changed through the globe.)

Standard Equipment: Nothing. However it have order of diasters.

Weaknesses: To tell you about this weakness is hinted what you even know...

Note: Though that was about 2020 disasters happened, Kobe Bryant's Death and Leafyishere Return aren't just disaster surivials, they're likely worse to happened in 2020.

It's unknown how will the polar vortex has been over, it always start snow in the eastern U.S. so long.

Origin of the 2020 Disasters is started in January 2020 before people accidentally celebrated the new year.

Although the World War 3 is not gonna happen but instead, Coronavirus is happen in the world.

Haven't you been listen to people who tell you to stay safe and healthy? Too bad you're not survive the 2020 Disasters... 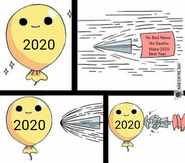 When 2020 will predicted there will be WWIII start or...? You just asked me for it! 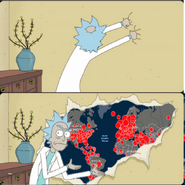 When you have to find something bad.
Add a photo to this gallery

Retrieved from "https://joke-battles.fandom.com/wiki/The_2020_Disasters_(Character)?oldid=373068"
Community content is available under CC-BY-SA unless otherwise noted.