Superman is the most powerful, enduring and prolific comic book character in history. His powers and abilities are constantly being portrayed as all powerful and unbeatable. Because... well he is Superman! Superman always wins.

Attack Potency: Omniversal | Beyond the concept the Omniverse.

Speed: Omnipresent | Beyond the concept of Omnipresence: He is Superman

Lifting Strength: Irrelevant | Beyond the concept of lifting: There is nothing he can't lift because he's Superman

Range: Beyond the concept of Omniversal

Standard Equipment: His suit, Fortress of Solitude, Literally Everything...

Weaknesses: Kryptonite (However, he has always encountered lots of Kryptonite and took a full Kryptonite beating and survived), Red Star Radiation (but still survived a blast equivalent to 50 Kepler Supernova's when weakened with red sunlight), Magic (But he’s tanked multiversal vaporizing magic blasts so this doesn’t matter) | Nope

Key: Base Level | At Full Power

The One Above All

Batman (He'll never in a million years match Superman like this)

Every DC villain ever

For that matter, every villain ever 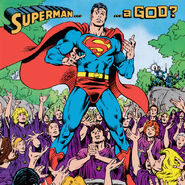 Superman is beyond omnipotent... Because he's Superman

All worship Superman
Add a photo to this gallery
Retrieved from "https://joke-battles.fandom.com/wiki/Superman_(Super_Exaggerated)?oldid=316981"
Community content is available under CC-BY-SA unless otherwise noted.