Joke Battles Wikia
Register
Don't have an account?
Sign In
in: WIP, The Most Powerful Character On This Wiki, Memes,
and 12 more

Shaggy Rogers (According to the Internet) 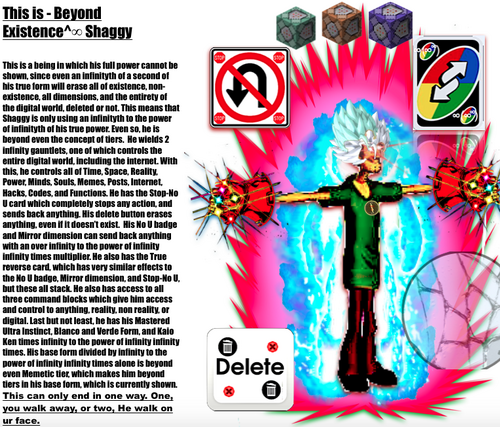 Shaggy is the most powerful being to have existed. (Wait, isn't that supposed to be the definition of a godmode?) But, unlike the traditional godmode, Shaggy got memed to godhood.

Speed: Subsonic (Shaggy and Scooby always run side by side when fleeing in terror from a monster. If a great danes running speed is 30-40 mph that means Shaggy can run at the same speed. This means that Shaggy is the fastest human alive beating Usain Bolt's top speed of 27 mph.) to Massively FTL+ (Shaggy is a being of omniversal power who initiated the big bang with a fraction of the power. It stands to reason that he could easily beat Usain Bolt. In fact, Shaggy can probably move at massively faster than light speeds, and he is just slowing down because he does not want to speed past his friend.)

Striking Strength: Words can't describe how strong he is, so ebkcmveklcnfjkdncjwkcjxjekd

Stamina: As long as the concept of Scooby Snacks exist he will never run out of stamina

Intelligence: Supergenius (Tricked everyone in the omniverse in to thinking he was weak and cowardly. Skill stomped every fighter in the multiverse at the same time while using only his pinky finger)

Zoinks Cannon: A cannon that can erase even the most durable being.

Give him scooby snacks and he will instantly obey you.

Knows why kids love the taste of Cinnamon Toast Crunch

Made the universe by sneezing

Got rejected from MK11, Made the developers regret their existence.

The only time he used all of his power, was when he broke up with his girlfriend.

His power is, in fact, limitless.

Defeated Matt from Wii Sports (And if he says he won, he's lying, don't trust him)

The One Above All

The Game Theorists (couldn't stop him from downplaying him to oblivion