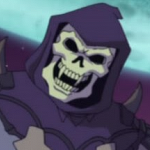 I'm an admin here, in case you haven't noticed. If you want me to take care of something for you, go ahead and ask. If you want to meme at me, then go ahead with that too, though I'll inform you that I have very high standards.

Otherwise, off to the Basement it is.