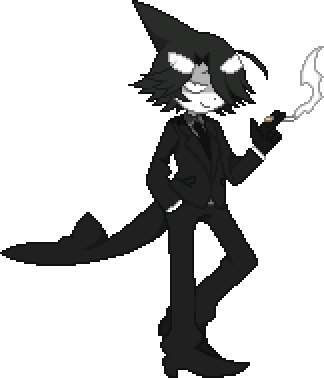 Idate (イダテ), or Orca (シャチｻﾝ Syachi-san) is a humanoid killer whale or orca, that has appeared in several Deep-Sea Prisoner / Mogeko / Okegom / Funamusea series, first appearing in Ice Scream as an antagonist and in Wadanohara and the Great Blue Sea originally as an enemy and later on as an ally.

He's always seen smoking cigarettes and as a result, he has a permanent stench of tobacco, as pointed out by Rocma. He loves strolling in peace and also violence, lots and lots of violence, finding enjoyment in bullying not just the strong but also the weak all the same.

Origin: Ice Scream (Though, along with most Deep-Sea Prisoner characters, he has appeared in several other series that appear to all share the same verse, most notably Wadanohara and the Great Blue Sea, where Ice Scream seems to have taken place afterwards)

Gender: Male (Altough he has a Female alternate form shown in some artwork, like the other DSP characters)

Age: Unknown, possibly hundreds of years old (DSP has stated that all the characters in Wadanohara and the Great Blue Sea are at least a hundred years old, and in the game, you can encounter Idate, known only as "Orca" in there)

Classification: A chain-smoking orca that likes strolling and loves bullying both the weak and the strong alike

Powers and Abilities: Superhuman Physical Characteristics, Echolocation and Enhanced Senses (Capable of hearing in a range of 0.5 to 125 kHz), Shapeshifting (Can change from a human-looking orca to an actual orca, instantly), Regeneration (Low-Mid. Has regenerated from being shot by a great number of harpoons and spears by Shirogane), Longevity (Has been said to be at least a hundred years old and despite all of that, he looks more like a young adult), Can breathe and fight underwater without any issues or drawbacks in his performance (Unlike characters like Rocma and Shirogane, who struggle to fight underwater), Enhanced Pain Tolerance (Shrugged off been shot by numerous harpoons and spears), Resistance to Extreme Temperatures (He is not bothered at all by living on a giant iceberg nor he has any issues swimming in the cold ocean), possibly Reality Warping, Madness Manipulation, Morality Manipulation and Death Manipulation (He didn't seem to be affected by the the corroding effects that were affecting the entire Blue Sea)

Attack Potency: At least Multi-Solar System level, likely High Universe level, possibly Low Multiverse level (Can easily tear apart people like Wadanohara and her familiars, who were capable of beating up the Mercenary Trio that were composed of world-traveling demons who should be far above regular Mogeko. Idate easily beat up Old, who previously made Tatsumiya shiver with fear, even with the magical abilities of the Great Sorcerer Meikai)

Speed: Unknown (Should be far above regular Mogeko and be at least capable of dodging Speed of Light attacks via powerscaling from Wadanohara and her familiars, who can beat up demons similar to Yosafire and those who scale to her, who were able of dodging her attack in which she damages the foe with light reflected off of her glasses)

Durability: At least Multi-Solar System level, likely High Universe level, possibly Low Multiverse level (Can withstand blows from Wadanohara and her familiars, who could contend with the Merc Trio and other beings far above regular Mogeko)

Stamina: Extremely High (Can swim and walk several thousands of kilometers out of pure boredom. Idate often shrugs off fatal injuries and while bleeding puddles of blood, he just keeps on smoking without a care in the world)

Intelligence: Average (Though he sometimes acts animalistic like a real orca, however, he does more so due to his sadistic and often uncaring nature, his intelligence is otherwise average in the perspective of a human being)

Weaknesses: He doesn't seem to take anything seriously even if it kicks his ass and gets moody if he loses his cigarettes, dislikes the usage of weapons and prefers using solely his fists to beat up others into a pulp of meat (Or rather, into literal chunks of meat) 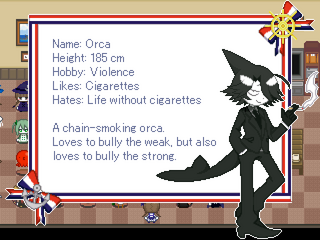 Donald Steel, AKA, Versus Man (VSBW) Donald's Profile (This was Post-Litter Box Donald and 4-A Idate)