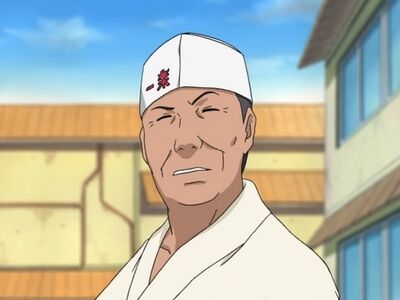 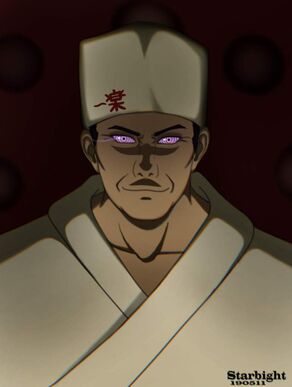 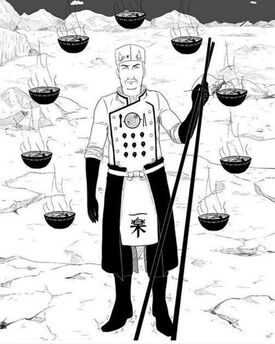 Teuchi, also known as the Ichiraku Ramen Guy, is the owner of Ichiraku Ramen, a restaurant in the Hidden Leaf Village which Naruto Uzumaki eats at regularly. This proved to be an advantage for their business, as after Naruto became a village hero, he agreed to become the face of Ichiraku Ramen, greatly increasing their income and their number of customers.

Teuchi doesn’t seem too powerful at a glance. However, his true power shone when Pain attacked the village. Teuchi used the Rinnegan under his eternally closed eyes to put everyone under a Genjutsu, making everyone believe that Naruto destroyed the Pains and reformed Nagato, convincing him to resurrect everyone he killed at the cost of his life. In reality, Teuchi effortlessly stomped every Pain, including Nagato, and brought everybody Pain killed back to life using chakra-infused ramen. Also, Teuchi puts a tiny amount of his own chakra in his ramen, and the only reason Naruto became this powerful is because he ate so much of it.

Powers and Abilities: Skilled Chef and Ramen Manipulation | Superhuman Physical Characteristics, Chakra Manipulation, Energy Projection, Stealth Mastery, Explosion Manipulation with explosive tags, Weapon Mastery (Versed in the use of kunai and shuriken), Acrobatics, Statistics Amplification (Can enhance his physical capabilities with chakra), Longevity (His broth is taken from the fountain of youth), Shapeshifting (Can transform into living beings and inanimate objects, and can use this in battle to confuse his opponents and catch them off-guard in a variety of ways), Duplication (Can create solid "shadow clones" that are identical to him and can use his abilities as well as relay any information they gained back to the original upon being dispersed), Summoning, Surface Scaling, Water Walking, Can replace himself with inanimate objects in the vicinity to avoid damage, and likely Paralysis Inducement (via paralysis jutsu) | All previous abilities, Earth Manipulation, Air Manipulation, Fire Manipulation, Electricity Manipulation, Water Manipulation, Yin Manipulation, Yang Manipulation, Yin-Yang Manipulation, Enhanced Senses, True Flight, Durability Negation, Creation, Aura, Power Bestowal, Enhanced Senses, Energy Absorption, Reality Manipulation, Healing with the Preta Bowl and Naraka Bowl, Paralysis with the black receivers (Can paralyse and hinder the movements of targets, and also control them), Regeneration (Low-Mid, scaling from Obito and Madara), Immortality (All Types), Extrasensory Perception (His sensory capabilities should be comparable to Naruto's, who can detect invisible clones that exist in a separate dimension), Acausality (All Types), Levitation, Telekinesis and Gravity Manipulation (Can control attractive and repulsive forces with the Deva Bowl), Body Control and Technology Manipulation (Can generate additional mechanical arms and weaponry such as blades, drills, missiles and cannons with the Asura Bowl), Resurrection (Can revive the dead with the Outer Bowl), Mind Reading and Soul Manipulation (Can read the minds of his targets and extract their souls by making contact with them with the Human Bowl), Matter Manipulation (The Taste Seeking Bowls are superior to Onoki's Dust Release, which turns targets to dust on a molecular level), Limited Power Nullification (The Taste Seeking Bowls erase and nullify ninjutsu, which includes energy and elemental based attacks, with the exception of those imbued with natural energy), Self-Sustenance (All Types), Invulnerability, Wood Manipulation, Forcefield Creation, Chain Manipulation, Healing, Dimensional Travel and BFR (Teuchi can travel to and from the pure world using the reincarnates of Ashura and Indra and the power of the ten-tails and teleport others from different dimensions as well as bring and send souls from and to the pure restaurant), Cosmic Awareness and Precognition (Teuchi watches the world from the pure restaurant and foresaw all the events of the 4th Ninja War, he could also sense the fight between Team 7 and Kaguya), Life Manipulation (His Creation of all things ability allows him to give creations life)

Stamina: His ramen has infinite calories, preventing him from losing stamina

Community content is available under CC-BY-SA unless otherwise noted.
Advertisement