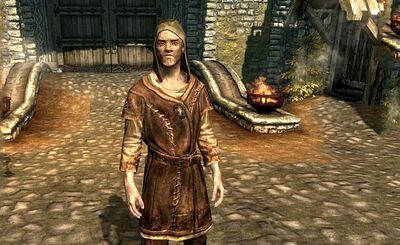 The courier that delivers letters to you is a Nord wearing random farm clothes, some boots, and a hat. Unlike the other couriers, he carries nothing else with him. He will only appear as part of certain quests, tasked to ensure important messages are in your hands. Using a dragon shout in public view can increase the probability of a contact with him.

Powers and Abilities: Superhuman Physical Characteristics, Regeneration (Mid-Low; Able to recover from being beaten to near death by The Dovahkiin, even if they use two-handed weapons or destruction spells), Dimensional Travel (Able to enter Sovngarde and Apocrypha), Cosmic Awareness (He knows where to find you and you will never escape his watch), Dimensional Storage (Able to store a large assortment of items in his Inventory), Resistance to Magic (Can shrug off the effects of many spells and enchantments), Fear Manipulation (He will always do his job, even if it means running into a city under siege by dragons) and Ice Manipulation (Able to withstand wearing no clothing even while subjected towards freezing temperatures), Time Travel (Can find you even when you are having visions of the Merethic Era), Underwater Breathing (Can talk while submerged underwater), Teleportation (Can reach you anywhere and at any time of the day)

Attack Potency: Likely Small City level+ (Has likely had to deal with Dragons during his travels)

Speed: Unknown (Since he mainly utilizes his witchcraft to find you, it is hard to gauge his speed)

Lifting Strength: Unknown (Uses his Inventory to carry things, so this is also hard to gauge)

Durability: Universe level+ (Able to withstand blows from The Dovahkiin)

Stamina: Infinite (In his opinion, the duties of a Courier never get old)

Retrieved from "https://joke-battles.fandom.com/wiki/Courier_(Skyrim)?oldid=309949"
Community content is available under CC-BY-SA unless otherwise noted.