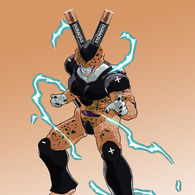 Cell Dorado is DBX's version of Cell which returned to life after the Cell Games. He respects no one but Gohan Blanco, as proven when he fought against El Hermano. However he is still up to no good, and strives to achieve his most powerful form to defeat Gohan.

Powers and Abilities: His abilities are the same as his Canon counterpart, but significantly enhanced in Golden and Duracell forms. Resurrection, Space-Time Manipulation, Law Manipulation, Matter Manipulation, Physics Manipulation, Reality Warping | Same as before but a greater degree | Void Manipulation (Upon obtaining his transformation, the entire universe shook in fear of him, and he obtained total control of the Universe), Resurrection (By Episode 12, Perfeccion Cell resurrected all previous villains)

Attack Potency: Low Complex Multiverse level (Fought against El Hermano for 300 episodes and should be somewhat comparable to Base Gohan Blanco) | Complex Multiverse level (Significantly stronger than before, and stated that he had infinite stamina and energy compared to before. Adult Videl, who is comparable to Gohan, did not expect such power from him.) | At least High Memetic+ (Upon absorbing the peach tree, and obtaining Perfección, he became far more powerful than anyone in all of existence combined, with Gohan Blanco confirming that he and his friends stood no match and stating that his power couldn't be matched by the likes of even Shaghan Verde. Stated that not even El Grande Abuelo could defeat him in that form.)

Retrieved from "https://joke-battles.fandom.com/wiki/Cell_Dorado?oldid=364456"
Community content is available under CC-BY-SA unless otherwise noted.