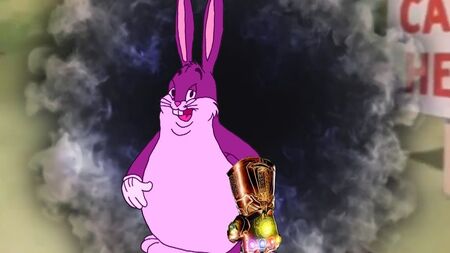 Big Chungus refers to an image of cartoon character Bugs Bunny, usually captioned with the phrase "Big Chungus" and presented as a game for "PlayStation 4" console. The word "chungus" was coined by video game journalist Jim Sterling several years before the meme became popular. Within the Siivagunner lore, Big Chungus is part of the Cool Meme Team.

Attack Potency: Large Star Level (Scales To Bugs Bunny) | Planet Level to Galaxy Level with sheer size (Grew this big), higher with growth | Universe level (After drawing power for Tik Tok Big Chungus has obtained new levels), higher with growth | At least Multiverse level+, likely higher (Can use the Infinity Gauntlet) | Universe level+ | At least Universe level+ (Was stated and shown to be beyond space-time as a whole), possibly Low Multiverse level (Was previously stated to have transcended all dimensions and to be above all of existence) | Outerverse Level (Can fight on par with Shaggy and is even considerably above him)

Waluigi (Super Mario Bros.) Waluigi's Profile (Both were 3-C, speed was equal and the battle was in the galaxy)

Son Goku (Dragon Ball) Goku's Profile (Both were locked at 5-B, and were restricted from using anything higher)